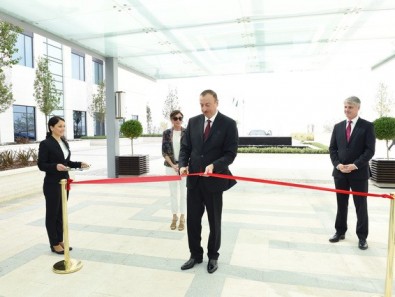 President of the Republic of Azerbaijan Ilham Aliyev and his wife Mehriban Aliyeva have attended the opening of “Bulvar Hotel” in Baku.

The head of state cut the ribbon symbolizing the opening of the hotel.

It was informed that “Bulvar Hotel” is the fourth facility of Absheron Hotel Group. The five-star hotel, which has 818 rooms, is also a member of the Autograph Collection, a diverse collection of high-personality independent hotels.

President Ilham Aliyev also met with staff of the hotel.

- I heartily congratulate you on the opening of the Boulevard Hotel. I have just reviewed the hotel. It is a wonderful hotel built on an advanced level. Its exterior and interior design are at the highest level. It is the largest hotel in Azerbaijan and perhaps even in the region. The construction of such a large hotel actually shows that the number of visitors to Azerbaijan is growing every day. Despite the fact that about 10 modern hotels have been commissioned in Baku over the past two or three years, there was a need for the construction of a large hotel.

The hotel is also conveniently located. It is located on the White City Boulevard. This is also a novelty, because, as you know, these territories used to be occupied by industrial enterprises and other tasteless buildings. Today, this whole area, a continuation of the public area and of the boulevard, is being made available to the people of Baku.

There is no other place in the world that could emulate the beauty of the Baku Boulevard. I am very glad that the new White City Boulevard has been built and the Boulevard Hotel commissioned. This shows once again that our country is developing rapidly. Our country has opened its doors to all visitors. The number of tourists coming to Baku is in its millions. I am sure that after the European Games the number of guests will further increase because Baku is a beautiful city. In my opinion, it is the most beautiful city in the world – it is possible to say that today. People coming to our city are saying that they do not want to leave Baku or will try to come back because the historical architecture of the city, the atmosphere, the security, the high level of service, the modern hotels, the recreation areas, etc. attract visitors. However, we are doing this work primarily for the people of Azerbaijan, for their comfort and recreation. Today, the people of Baku enjoy all these wonderful opportunities.

I want to say again that the construction of the region’s largest hotel in Baku, especially after the opening of such hotels as Hyatt, Sheraton, Four Seasons, Marriott, Kempinski, Jumeirah, Hilton and finally Inturist in recent years, is the best indicator of our development. I am told that more than 700 jobs have been created here, most of which are intended for Azerbaijani citizens. This is also an excellent sign. High salaries are paid and people are provided with jobs. I see that most employees are young people and that you have already gained a wonderful experience here. I am sure that you will be working in even more senior positions in the future. Once again, I cordially salute you and wish you success.

In conclusion, a picture was taken.