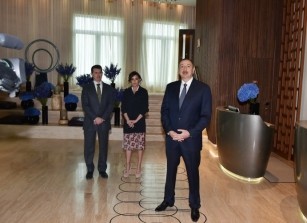 President Ilham Aliyev: "White City" boulevard to be at disposal of people in the near future

"Recently, the tourism sector is rapidly developing in Azerbaijan. Personnel preparation is at the required level. In recent years, numerous hotels have been built in Azerbaijan, particularly in Baku. Today, all modern and most advanced hotel brands are situated in Baku... For the near future, the hotel "Boulevard" will be opened in the "White City" boulevard. The length of the boulevard has reached 16 km." - Azerbaijani President Ilham Aliyev said it during inauguration of "Intourist" hotel.

The head of state said that the "White City" boulevard will be at disposal of people in the near future: "Thus, the guests of our city will visit and see once again that how strong Azerbaijan is and how rapidly developing. Guests of Baku to see this.