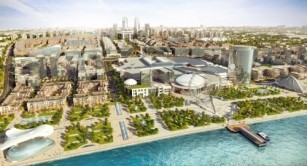 The road down the Kh. Rustamov Street is being upgraded within Baku White City project

State company "Azəryolservis"  of the Ministry of Transport started to reconstruct the road along Khagani Rustamov street. The new six-lane road with a width of 45 meters and  wide sidewalks of a total length of 1.7 kilometers will link two main arteries of the city of Baku - Babek and Nobel Avenues, in other words - the North to the South of Baku White City and will extend till the new boulevard line.

H. Rustamov street frames from the West the area of Green Hill district - so-called "green island" of the modern city center, where currently four apartment complexes in the French style  are being built, along with the ongoing construction of one of the Landmarks of the project -  Baku White City Office Building.This office building represents the entry to the project by Nobel Avenue and it serves as the gateway to Baku White.

The renovation of this street will facilitate comfortable living of the first inhabitants and provide them with easy access to the different facilities inside and outside Baku White City.Along with the development of road infrastructure, the utilities systems are also being laid in cooperation with the appropriate government agencies: "Bakıelektrikişəbəkə", "Azəriqaz", "Azersu". To ensure uninterrupted water supply new water lines and sewage systems are being built.

As the result of joint projects with the Ministry of Communications and the leader of the domestic telecommunications market Delta Telekom, a full range of communication services will be available here.