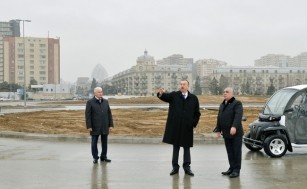 President of the Republic of Azerbaijan Ilham Aliyev has reviewed the progress of construction at the Baku White City boulevard.

The head of state was informed about the work carried out as part of the project. The foundation stone for the new boulevard was laid by President Ilham Aliyev in May, 2013. The Baku White City boulevard will have modern catering and service facilities. The green areas will be laid out here.