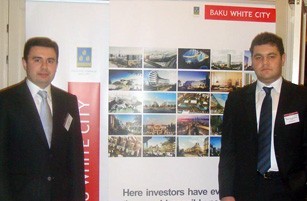 The Baku White City project was presented in Riga

The presentation of the Baku White City project took place during the Azerbaijani-Latvian Business Forum held on January 16-18 in Riga, in the Radisson hotel

The Business forum, during which issues of bilateral relations between Azerbaijan and Latvia were discussed, was organized in the framework of the official visit of the Azerbaijani President Ilham Aliyev to this country.

Latvian and Azerbaijani businessmen were informed that the Baku White City project, developed in accordance with the order of the Executive Power of Baku with the participation of such world-famous companies as “Atkins”, "Foster + Partners (UK), and« F + A Architects » (USA), will modify and expand such concept as a modern center of our capital, contributing to a significant increase in the length of the Baku boulevard. It was emphasized that the Baku White City project is an excellent investment opportunity as it provides special privileges for potential investors.

The presentation aroused great interest among all participants of the event at which an animated film about the project was demonstrated as well.

The Baku White City urban development project undertaken within the frame of the Decree of the Azerbaijani President Ilham Aliyev on the approval of the “Plan of complex measures to improve the environmental situation in Azerbaijan in 2006-2010 " favors the creation of a new modern capital center, as well as the development of a new type capital infrastructure.