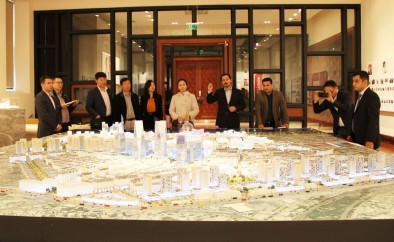 A delegation from the Chinese Shenyang Yuanda Enterprise Group led by the director of the company visited the project Baku White City.

The company, based in China, is a large international enterprise group mainly engaging in the manufacture of mechanical and electrical equipment and wind power generation engineering. As the biggest dealer of curtain walls in the world, Yuanda has been ranked at the top of the industry for nine consecutive years.

Director of George Tsonga became acquainted with the project. It was noted that Urban Development Project “Baku White City” is carried out under the Decree of the President Ilham Aliyev on the approval of the “Plan of complex measures to improve the environmental situation in Azerbaijan in 2006-2010”. President Ilham Aliyev attended the groundbreaking ceremony of the Baku White City project on December 24, 2011. In the territory, in the past known as the "Black City", according to a new development project is built the most modern and largest residential center of international level. The new administrative and commercial areas, centers of entertainment and tourism, and the continuation of the seaside boulevard are being constructed there at time being.

White City project has generated a great interest among the delegation from China. Mr. Tsong took an interest about experts and implementation of the project, as well as discussed the possibility of cooperation in the future.