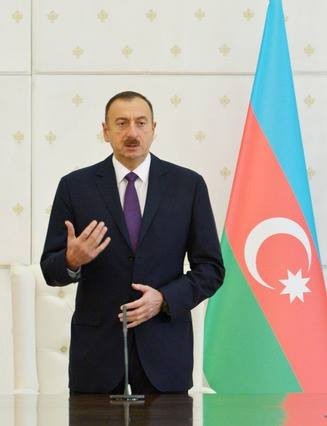 Ilham Aliyev spoke about Baku White City project and the ecological situation in Azerbaijan within the meeting of the Cabinet of Ministers dedicated to the results of socioeconomic development in nine months of 2014.

"...environmental issues should be given constant attention because they are our life, our children's lives and the future of our nation. We need to protect nature and try to clean all contaminated sites. I can also mention the White City project. The White City is being created on the territory of the Black City. Here, too, there is a huge symbolic meaning. Business people used to come here from abroad, worked in the oil industry of Azerbaijan, made large profits and billions of revenues. But what did they leave behind? A black city! They left this environmental disaster to us. What part of the money these foreign oil barons earned was spent on environmental issues? Nothing was invested in the environment. They simply came here to make profit and they did make a lot of money. What did they leave to us? Only a black city!

Today the independent Azerbaijan is eliminating this environmental disaster. It is also quite symbolic because there will be a White City instead of the Black City. The White City will be one of the best urban development projects not only in the South Caucasus or in this vast region, but also globally. The contours of the White City are already discernible.

This is how we need to implement other projects as well. We have to attract business people here as well. I am aware that there is great interest in the construction of houses in Azerbaijan today – in Baku and elsewhere. This interest slightly declined once, but our economy is growing fast and this interest has increased significantly again. This work may be organized very well. If a person or a company wants to build a house, environmental measures must be taken as well. People should be resettled. I think that the time when space was provided for the construction of houses is now in the past. Those who want to build a house should turn to city or district executive authorities. The latter should provide them with space either on the site of former industrial plants and factories that are in disrepair or in places that require environmental measures.

We have done this in Baku. Look what we have created at the industrial sites that were once unusable. The Heydar Aliyev Center was built on the territory of a plant named after Lieutenant Schmidt. There was also an environmental disaster there. When I went to look at it, I was horrified: how can one organize production in such conditions? Everything was destroyed. Now some people have actually forgotten that there was a plant named after Lieutenant Schmidt there. Or let’s take the area where the Olympic village has been created. On the territory opposite the "Koroglu" metro station there were plants producing roofing slate and tubes. They also polluted the air. And now there is a beautiful Olympic village there. We have to go this way both in Baku and in all our cities and regions.
The White City boulevard is under construction now. It will be open to the public perhaps in a few months. Thus, from Bibi-Heybat, from the Flag Square in the direction of the city, work is also going on. From the sports camp to the White City, to the oil refinery, there will be a wonderful promenade – a boulevard of almost 16 kilometers.

In conclusion of my speech I want to say a few words about preparations for the first European Games. Work is progressing on schedule. All sports facilities are being renovated and built. Of course, a great focus is on transport issues. This work is also progressing well. The focus is also on security matters. We will conduct the first European Games at the level of Summer Olympic Games. I am sure that it will be the case."