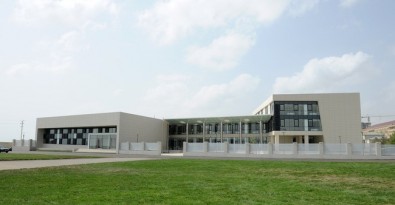 Ilham Aliyev attended the opening of the French Lyceum of Baku

A ceremony to open the French Lyceum of Baku has been held.

President of the Republic of Azerbaijan Ilham Aliyev and his wife Mehriban Aliyeva attended the ceremony.

President Ilham Aliyev's attention to education proves that the development of human capital is one of the core principles of the government policy. State-of-the-art schools have been built, new blocks for educational facilities constructed in both the capital and the country's regions in the past few years. Important work has been carried out to strengthen material and technical infrastructure of schools. The Heydar Aliyev Foundation has strongly supported this government program. Special attention has been paid to education of national minorities in Azerbaijan under the Foundation’s “Support for Education” project. Settlement of education-related problems of children of foreigners living in Baku has also been the focus of attention. The projects of the Heydar Aliyev Foundation on this front have yielded results with the construction of the French Lyceum of Baku being one of the striking examples.

The 320-seat lyceum is located on the territory of the White City. The lyceum was built in a modern architectural style. It occupies a total area of 14,000 sq.m.

President Ilham Aliyev and his wife Mehriban Aliyeva cut the ribbon symbolizing the opening of the facility. The lyceum will offer pre-school and elementary education. There will also be college and lyceum groups. One hundred students will receive education at the lyceum this academic year.

A groundbreaking ceremony for the facility was held in October 2011 under the agreement on the establishment of the French Lyceum of Baku signed between the two countries' governments as part of President Nicolas Sarkozy’s visit. The lyceum, whose establishment was supported by the Heydar Aliyev Foundation, will create ample opportunities for French-speaker foreigners temporarily or permanently residing in Azerbaijan and Azerbaijani citizens to receive education in French. Teaching here will be based on a classic French 12-year secondary education plan, which also includes kindergarten. Teaching will be conducted in French in accordance with the French national education system. The certificates to be given to lyceum graduates will be recognized by the French Ministry of National Education. Graduates will have an opportunity to continue education in any university in France.

French President Francois Hollande reviewed constructed progress at the lyceum when he was on an official visit to Azerbaijan this May.