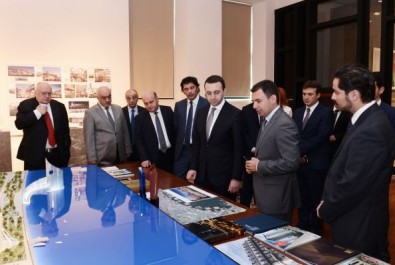 Baku, September 12 (AzerTAc). Prime Minister of Georgia Irakli Garibashvili has today viewed the Baku White City project.
The Premier was informed that Urban Development Project “Baku White City” is carried out under the Decree of the President Ilham Aliyev on the approval of the “Plan of complex measures to improve the environmental situation in Azerbaijan in 2006-2010”. President Ilham Aliyev attended the groundbreaking ceremony of the Baku White City project on December 24, 2011.
The Baku White City is the largest ongoing project in the Caucasus, covering 221 ha including 39 ha of landscape.
The Baku White City master plan envisages the creation of 10 universal urban districts with each of them to offer its residents the best living, working, recreation and entertainment conditions. Baku City will rearrange and expand the Boulevard, the gem of Baku that is situated right in the centre of the Baku Bay.
The Baku White City Projects involves not only local companies, as well as foreign specialists. The project creates new investment opportunities for local and foreign investors.
The Baku White City Project has won the MIPIM Asia Awards 2011 (Hong Kong) competition in the category “Best future project of Central and Western Asia”.