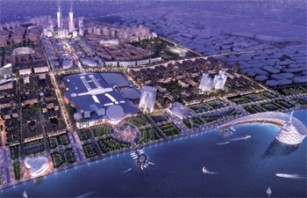 A white life for "Black city"

Ten years or so ago no-one could have dreamed that Baku would be transformed so quickly and on such a scale. New quarters with high-rise apartment blocks, state-of-the-art parks, roads and bridges - all these have altered and updated the face of the country's main city incredibly quickly. But arguably the most ambitious project of recent times has been the transformation of the eastern part of the city centre, known as Black City, into Baku White City (BWC). This is a symbolic, landmark project - the oil which, hundreds of years ago, polluted and degraded this part of the capital will help it to become one of the most attractive of places, a site of unprecedented transformation and change. It is the revenue from oil and gas projects which is helping to kick-start such large-scale projects and to implement projects the people of Baku could only have dreamed about.

Everything designed for comfort

The project has already been approved and Baku White City will replace the present Black City, which was named for the pollution emitted by its factories. The BWC project, which began as a town-planning measure to expand the city centre and the Baku Boulevard to the east, has become a large-scale international urban construction project. Alongside Azerbaijani specialists, the world-renowned engineering consulting company Atkins, the office of the legendary architect Norman Foster and the American company F+A Architects, famed for their commercial projects, have been working on its development. The general plan for the development of Black City was prepared by instruction of the head of the Baku Executive Authority dated 11 June 2007 as part of the implementation of Azerbaijani President Ilham Aliyev's decree endorsing the "Plan of integrated measures to improve the ecological situation in the Azerbaijani Republic for 2006-2010". Atkins company director Tim Askew said that one of the tasks set before the project developers was to make it attractive to investors, but the project aimed, first and foremost, to creat an urban district which would combine original architecture, technical convenience in the construction process, economic expedience, the human factors of engineering and general infrastructure and would follow the principles of ecological architecture. Project planning was based on the convenient district principle of building, which allows for the creation of a unitary assembly of detached houses and dwellings, kindergartens, schools, parks, transport network and fine roads. Ten original city blocks, each offering the best conditions for life, work, leisure and entertainment, would be built. "Before drawing up a concept for Baku White City, we studied in detail the planning and building of such major cities as Barcelona, London and Paris, concentrating on those details which best suited our vision of the future centre of Baku and which most reflected its specific qualities. As a result the future face of Baku White City incorporates best the world can offer for integration into an existing urban environment," Tim Askew said. One remarkable fact which makes the project particularly unique is that each of the ten quarters will have its own "jewel". These will be select, unique, single-unit buildings, bridges and compositions marking the entrances to the city. If we are talking in figures, then dwellings will constitute the main part - 75 per cent - of overall land area. According to the general plan, a large number of the buildings will be occupied by offices (9 per cent) and retail trade outlets (5 per cent). In addition, the so-called "suitable for commercial premises" category, accounting for 11 per cent of building space, was taken into consideration. This raises the possibility of using the first floors of most buildings for retail trade services, places of entertainment and so on. Most of the buildings in the residential districts will have 8-12 storeys. High-rise buildings will be located in commercial business zones on noisy transport routes, which means that the residential areas will be more comfortable to live in. The compact layout also means that the transport infrastructure must be improved. To solve the problem of parking, 40,000 parking places are provided for in the project. There are also plans to construct a metro station facing on to the central square in Baku White City, and to develop the bus network. So, an ambitious metropolitan complex is being created, in which the immediate proximity of various buildings and facilities will substantially reduce the need to make long journeys across the city. All in all, Baku White City promises to become a new, modern centre of the capital, with a population of about 50,000. In addition, when it is completed the project is expected to provide nearly 48,000 new jobs.

Clearly, the developers' plans are ambitious, but most inhabitants of Baku probably feel that the essential things today are not only the convenient infrastructure and attractive appearance that this project promises to provide. When the plan is implemented the industrial image of Black City will pass into oblivion and it will be replaced by a city with modern amenities and harmony, an integral part of the concept of urban ecology. Every building in Baku White City will be built according to the principles of ecological housing space, which is undoubtedly of huge importance for today's Baku, where the air is saturated with harmful emissions of exhaust gases, dust and so on. That is why it is particularly significant that 39 hectares will be allocated for the planting of trees and shrubs in the new project. Ecological monitoring has already been carried out in Black City and work has been done to purify and detoxify the waste accumulated from the oil refineries. Incidentally, all of these facilities will be moved out of Black City in the course of time. One of the measures to make Black City "white", and one of the key steps towards improving the ecological situation in the capital, is the purification and redevelopment of the Gulf of Baku. At present, apart from the purification of polluted land and shifting of outdated industrial facilities away from Black City, plans are underway to develop the Seafront Boulevart. Because of its location in the very centre of the Gulf of Baku, Baku White City will help to substantially lengthen the existing urban Primorskiy Bulvar. The new Bakinskiy Bulvar, which is already unique in size and is believed to be the longest in the world, will have an area of 17.5 hectares, being 1,300 metres long and 150 metres wide. In the west the new boulevard will link up with the existing one, facilitating its continuation eastward. A tramway will be built along the seaboard of the Caspian Sea, thereby providing yet another means of ecologically sound public transport to link the whole of the coastal area. A sea route for water taxis or small ferries will also be introduced to link several landmarks along the Gulf of Baku with the city centre. According to the concept, the coastline will also feature a number of cultural and entertainment facilities; the most ingenious will be a Pavilion of Contemporary Arts. Another attraction along the new boulevard, promising to make the coastline instantly recognizable, will be a hotel building of unusual shape built on a pier jutting into the sea.

Probably the first thought entering the head of any Bakuvian who has studied the details of the project is "The sooner the better!" Tim Askew says that in principle the project could be implemented in a fairly short time for an undertaking of this size. Everything depends on how quickly the finance becomes available, and that means attracting investors. "Each phase will take, on average, 3-4 years. However, bearing in mind that project implementation depends on the participation of investors, it is too early to speak about any specific timeframe. The only thing that can be said with certainty is that the whole infrastructure of the project should be in place by 2015," he confirmed. At the same time, the scale, the focus on the ecological factor, the soundness and the integrity of the project, coupled with the advantages for investors, increase the chances of the project receiving stable funding. Baku White City has already captured the interest of local and foreign investors. Individual buildings in the project have been nominated for awards at international exhibitions in Dubai, Jeddah and Hong Kong. And the project as a whole has been put forward for nomination as the "Project of the Future" at the most influential MIPIM-2011 international exhibition, which is held every year in Cannes. It was also nominated in London for the prestigious architectural prize "WAN Awards 2010". To conclude, it is worth recalling that back in the 1970s Azerbaijan's national leader Heydar Aliyev said: "The city, which for centuries has been called Black, will become White, will become pure, will blossom and will be transformed into a beautiful corner of Azerbaijan." Today this dream is beginning to come true.