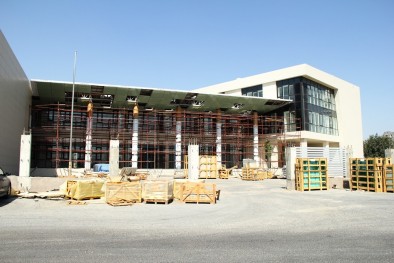 The construction of the French Lyceum is completing

Construction of the French Lyceum building in the framework of Baku White City project will soon be completed.

The Lyceum building is located at the intersection of Nobel avenue and Khagani Rustamov street, which is under construction. A pedestrian crossing, having access to the four sides is also planned at the area.

To the south of French Lyceum construction of Baku White City Hotel, which will be ready to host the first European Games 2015 guests in Baku, is being completed. The winner of international awards – Baku White City Office Building with an outstanding architecture is under construction on the north side of the Lyceum. In addition, Green Hill district with Parisian style houses is built in the neighborhood.

It should be noted that the building of the Lyceum for 320 students was designed in the style of constructivism. Total building area is 7960 square meters. Students will be provided with classrooms, research laboratories, office rooms, as well as rooms for social and public events, art clubs, sports and assembly halls, as well as kindergarten.

The building, that is planned to be ready by the beginning of September 2014, was founded in October 2011 with the participation of the Presidents of Azerbaijan and France. A lot of support in the establishment of the Lyceum was provided by Heydar Aliyev Foundation.

French-speaking foreigners and citizens either temporarily or permanently residing in a country will study in the French Lyceum. A 12-year education starting with kindergarten, will include classic French curriculum. School-leaving certificate issued by the Lyceum at the end of education is recognized by the Ministry of National and Higher Education and Research of France. Thus, graduates will have the opportunity to continue their education in any college or university of France.