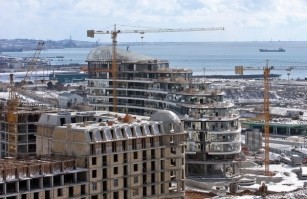 It isn’t immediately obvious what the link between a massive new masterplanned city in the heart of Azerbaijan’s capital, Baku, and Dubai is.

After all, there is a distance of 17,000-plus kilometres between the places. But delve a little deeper into Baku White City and you’ll find the UAE Emirate is having a significant impact on an urban development set to dramatically change the landscape of Baku.

The project is the government’s response to removing the last vestiges of its old oil industry from the capital, after it sprung up at the end of the 19th century at the eastern edge and became known colloquially as Black City. As Baku spread north-eastwards, the former oil centre became an unsightly black spot, disconnecting parts of the east and west.

In June 2007, the government decreed that a major regeneration programme would be implemented, beginning with this area. The Baku White City masterplan sees the 221-hectare site transformed into a new environment made up of 10 distinct mixed-use urban districts.

It provides a total of 4mn m² of gross floor area, of which 75% will be for residential use. The development will be populated by a community of 50,000 people in some 19,700 households (residential and commercial) and provide around 48,000 jobs.

It will be served by a number of transport links, including an extension of the existing metro network, to run underneath Nobel Avenue – a city highway that runs through the project – as well as bus and taxi stops. Elena Chernova, special projects manager at Baku White City, says metro tunnelling work is underway but there is no exact date for when the metro itself will be finished. As a result of the metro, Nobel Avenue will be slightly remodelled, smartened up and include a promenade on both sides.

There is also provision for a tram along the existing and future extension of the southern boulevard close to the Caspian Sea, which falls just outside of Baku White City, and is the responsibility of the city municipality. The Baku White City boulevard will add 1.3km to an existing boulevard and will be partly finished in time for the inaugural European Games in 2015.

Engineering firm Atkins was commissioned by Baku White City as lead consultant/strategic masterplanner in 2007, with the masterplan signed off in 2010 by city authorities and the foundation stone laid by the president on his 50th birthday in December 2011.

Matthew Tribe, director of masterplanning and design for Atkins, says the client was keen to benchmark itself against current international best practice seen in established European cities and rapidly-emerging cities like Dubai.

“What we’re seeing now is almost the rebirth of Baku. This means looking at new reference points, and Dubai has been one of the most important,” he says. “Our client saw the need to bring in international consultants who really understood their challenge from day one and could bring their vision to life.”

Atkins has worked on many masterplanned urban developments in Dubai, including visioning of Downtown Dubai and Business Bay, as well as masterplanning Areas A and B of the Khalifa Industrial Zone Abu Dhabi (KIZAD). It is now leveraging that experience in Baku.

“The important part is understanding the complexity of this new development and how the project can successfully plug into an existing city; a city that is thriving, a city that is working,” says Tribe. “But the scale of such developments, if not handled correctly in terms of the investment in appropriate levels of infrastructure, transportation, schools, community facilities and public open space, would cause problems for the existing city.”

That was one of the biggest challenges in Baku, because the development is only 4km away from the medieval city centre, and within an existing network of roads and infrastructure. Atkins had to ensure it didn’t disrupt the city by delivering nearly 6mn m² of mixed-use development on the capital’s doorstep.

“So the way we have approached the transportation strategy, the way we have embraced the extension of the metro-line, the inclusion of schools, hospitals, parks and other essential community infrastructure integrated with a mix of sustainable land uses is very much at the forefront of the planning exercise,” says Tribe.

He says that Dubai authorities dealing with major mixed-use urban developments, such as Mohammed Bin Rashid City, now fully understand that the provision of public open spaces and community facilities have to be part of development planning and design proposals, whereas in the past some developments were either inappropriate or insensitive to the wider area. Baku can, and is, learning from this, he argues.

“Infrastructure needs have to be catered for in a manner which doesn’t overload the system. This leads to responsible, well considered and sustainable development. We’re seeing that influence from the authorities in Dubai being taken on board by all the leading developers. They don’t want their city exposed to rampant market forces, as has happened in the past,” says Tribe. “So while in some respects Dubai has had to learn its lessons the hard way, because it was pioneering in the scale of its development, other cities such as Baku can take a more carefully planned approach from the start.”

The birth of Baku White City has predominantly been funded by government money, but the private sector is now developing and inward investment is being encouraged. Chernova says that investors have to start construction activities no later than two years after buying their plots.

“What you don’t want to happen is to have nice houses everywhere and a construction site in the middle of it,” she adds.

Investors are not allowed to build blocks that are higher than eight-storeys for typical residential buildings, which have been designed along the lines of both classic and contemporary Parisian architecture. However, they are allowed to have a retail/office/hospitality component on the “flexible” groundfloor. Sufficient parking must also be provided.

Around 35% of the project is currently under construction, or put another way, six of the 10 districts. It is intended that each district will have a landmark, which has been defined in the masterplan, but is subject to change depending on what the investor envisages.

The majority of investors are local; however in the Park District, the International Islamic Charitable Organisation Asia Muslims Committee – Kuwait, is building a residential tower with groundfloor retail called Kuwait Tower.

Moreover, the architect of the project’s main shopping mall (working name Baku City Mall) in the Waterfront district, is the same firm that designed Dubai’s Mall of Emirates (MoE). F+A Architects came up with a mall concept that follows some of the MoE’s features such as the dome and interior layout. It will be decidedly smaller – with over 100,000m² of leasable area – but will still be the largest in the country.

“It [Baku City Mall] does look alike [to Mall of the Emirates] but it is different at the same time,” says Chernova, who adds that an anchor store has not yet been announced by the local investor. It will also be linked to the north side of Baku White City by an iconic pedestrian bridge that will span Nobel Avenue.

The mall will take up about one-third of the Waterfront district, which was designed by Foster + Partners. The firm was appointed by Atkins to provide detailed design for the section of Baku White City below Nobel Avenue, which in practical terms means the Waterfront district that stretches out to the Caspian Sea.

Tribe says Atkins, which has a team of between 35-50 on the project, is currently updating the masterplan while working on 55 individual building plots.

One of the considerations is how to adjust the plot sub-divisions to ensure that what’s being offered responds to investor demand. It is also accommodating new land use requirements as the government expands in health and education initiatives. There are five schools planned, including a French school launched by former president of France, Nicolas Sarkozy, in October 2011.

“There are other architects and international consultants working beside us, but we’re providing the overarching design and engineering continuity for the project,” Tribe says.

“In general, we’re looking at how we need to accommodate some of the big ticket items like the metro coming in. We’re working with the metro authorities to ensure that we incorporate the stations in an appropriate location, which is integrated within the development.”

Tribe says with the current uptake of development, it will probably take up to 15 years to fully realise the masterplan vision.

Road infrastructure and utilities work, which is being carried out by city authorities, will be finished within the next five years, adds Chernova.