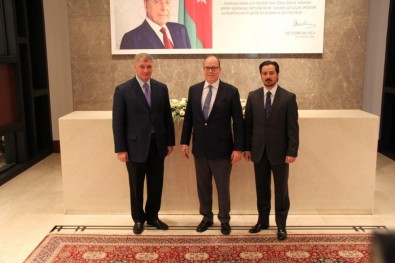 The project’s director Ruslan Sadikhov spoke to the guest about the work to be done and that has been carried out within the framework of the project. The area was used for the storing and processing of oil products by the oil industry for more than hundred and as a result it has become the dirtiest site of Baku Bay. Given the important role of the human factor huge effort was made to clean the site up. Oil waste has been siphoned out from a depth of several meters and other environmental measures taken. The project was carried out within the framework of the Decree of Mr. Ilham Aliyev, the President of the Azerbaijan Republic entitled “Comprehensive action plan for improving the ecological conditions in the Azerbaijan Republic during 2006 – 2010”.

Prince Albert was also briefed on the progress and future work, on further development  of the road network, engineering and utilities, telecommunications network, and investment opportunities built by the government. Regardless of the investment, the project offers the provision of legal and technical support to investors and builders of Baku White City project from the start to completion of the facility, based on the "one window" principle.

During the visit Mr. Sadigov told about planned districts, French school, commercial areas, parks, entertainment and sports facilities. It was also mentioned that some of the building projects were nominated for the awards at the exhibitions in Europe and Asia. And the whole project was the winner MIPIM Asia Awards 2011 in the category "Best Project of the future of Central and West Asia," and also received the award for "Best Urban Project" at the exhibition Cityscape Global 2011.