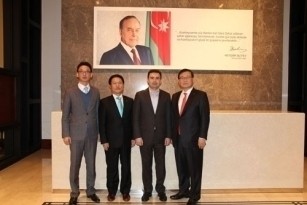 The guests from South Korea acquainted themselves with the history and the future of the project, as well as with the model of Baku White City. Mr. Chung learned about the current improvement of the ecological status of the site, about the interest of investors and development of the construction. The great contribution and care of the government about the development of urban planning were also pointed out. It was mentioned that the project was carried out within the framework of the Decree of Mr. ILHAM ALIYEV, the President of the Azerbaijan Republic entitled “COMPREHENSIVE ACTION PLAN FOR IMPROVING THE ECOLOGICAL CONDITIONS IN THE AZERBAIJAN REPUBLIC DURING 2006 – 2010”.

Representatives of "Halla Group" also asked about the investment opportunities in Baku White City project and further opportunities for cooperation.