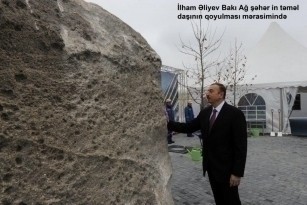 In a ceremony 2 years ago, the President of Azerbaijan, Ilham Aliyev broke ground to lay the foundation for Baku White City - considered to be one of the greatest urban projects of our time.

Today we are witnessing the realization of the famous project , widely represented in the international arena that gained recognition among professionals as one of the most ambitious urban development projects; the winner of  the numerous international competitions, such as MIPIM Asia Awards 2011 in the category "Best Project of the future of Central and Western Asia "and" Best Urban Development project" at Cityscape Global.

Carried out within the Decree of the President Ilham Aliyev on the approval of the "Plan of complex measures to improve the environmental situation in Azerbaijan in 2006-2010"  Baku White City project provides removal of old oil, engineering and other outdated industrial and cleaning up contaminated land - the area that played an important role in the oil industry for more than 100 years, performing activities of processing, storage and transportation of "black gold".

Another active development is the 24 hectares Park District area, located on a hill, crossing Baku White City from east to west and designed to include a series of mid-rise (up to 20 floor) buildings, constructed on a pedestal that will be offered as commercial/retail space.