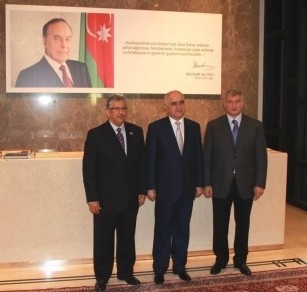 According to a press release of the Ministry of Economy and Industry of Azerbaijan, - "Entrepreneurs from Saudi Arabia are interested in Baku White City  and STP Projects in Azerbaijan"

The delegation headed by the chairman of the Saudi Supreme investment department Abdüllatif bin Ahmad Al-Othman on an official visit in Azerbaijan, visited the Baku White City and STP projects.

Director of the Baku White City Project Mr. Ruslan Sadyhov reported that this project is one of the largest urban development projects in the world, being implemented in environmentally unsuitable oil waste contaminated site. Implementation of the project will clean these areas and prepare the site for the construction of residential complexes, where the social infrastructure development would comply with the modern standards.

The sides discussed prospects of investment companies from Saudi Arabia to the project.