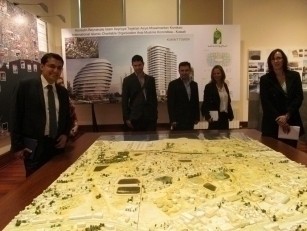 PMP Legacy is an international consulting company that helps in organizing sports events , as well as the implementation of global sports projects, were the consultants of the Olympic Games in London.
In the process of preparation for the submission of bids for hosting the European Football Championship in 2020  the guests were enquiring about number of hotels within the project and their capacity.

The project, which, in addition to architecture and investment perspectives will also create an attractive urban environment and infrastructure , impressed visitors with its forethought and versatility. According to them Baku White City is a world-class urban project that will make a significant contribution to the development of the city.