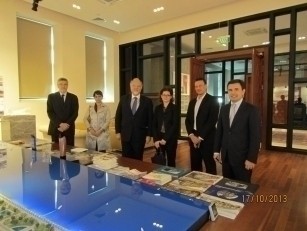 The delegation of the Embassy of France in Azerbaijan visited the office of Baku White City.

The Delegation of the French Embassy in Azerbaijan , headed by Ambassador Extraordinary and Plenipotentiary Mr. Pascal Monnier visited the project office of Baku White City.

Guests enquired about the construction progress of the French school , the groundbreaking ceremony of which was attended by President of Azerbaijan Ilham Aliyev , former President of France Nicolas Sarkozy and our country's First Lady Mehriban Aliyeva. Creating a school that provides opportunity for all francophone foreign citizens living in Azerbaijan and Azerbaijani citizens to learn the French language is within the interests of both countries and is an important factor in cooperation between the two countries in the fields of education, culture and linguistics .

The guests discussed investment opportunities for French entrepreneurs in the project and praised favorable conditions created by the state to attract local and foreign investors.

Mr. Monnier said that  since his first visit, the Baku White City project has moved further a lot and is being actively implemented.