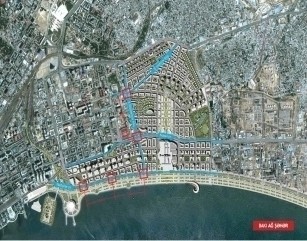 As previously reported, the state company "Azəryolservis" under the Ministry of Transport is upgrading the road down Khagani Rustamov street. In accordance with the project two new pedestrian crossings are to be built. The company "SaNUR" has already started building new crossings at the intersection  of H.Rustamova with Nobel Avenue, as well as at its intersection with S.Vazirov Street . Each of the underpasses will have 4 outputs.