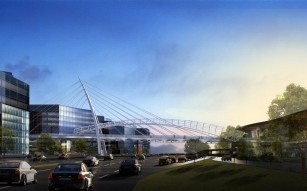 In a ceremony just over a year ago, the President of Azerbaijan, Ilham Aliyev broke ground to lay the foundation for Baku White City - considered to be one of the greatest urban projects of our time.

On the 25th May, 2013 President Aliyev laid the foundation for Baku White City Boulevard, a process that will result in the boulevard being extended by a further 3 km, which will make it not only the longest in the world, but also one of the most beautiful.

As Baku White City Project implementation continues, the Boulevard line change, as will the appearance of Nobel Avenue which will be transformed into an urban promenade, with 20m wide, tree-lined sidewalks, continuing the extensive network of comfortable walking areas, streets and squares offering prioritized traffic for pedestrians.

The reconstruction at the intersection between H. Rustamov Street and Nobel Avenue will include an underground, pedestrian, crossing, with 4 entry / exit points.  As part of the development of the Baku White City Transport Infrastructure Development the location and exits of the new subway station were approved.  The next station, after Xatia, will make it more convenient for those who live and work in the area.  The new Metro has 5 exit points, leading in different direction including towards the new Fountain Square and shopping / entertainment centre.  The exit points will also provide safe underpasses for pedestrians crossing Nobel Avenue.

Because of the favourable investment climate, established by the Azerbaijan Government and Baku Executive Power, construction is well underway in several districts of Baku White City Project.

Atkins, in cooperation with local architects, has designed French style estates that are becoming more and more popular among citizens wishing to improve their housing and the French style, designed by Atkins.  The estates include apartments of different types and layouts ranging from standard 2-bedroom (90 sqm), more spacious 3-bedroom (125 sqm) and 4 bedroom (145 sqm) apartments.

Another active development is the 24 hectares Park District area, located on a hill, crossing Baku White City from east to west and designed to include a series of mid-rise (up to 19 floor) buildings, constructed on a pedestal that will be offered as commercial/retail space.

Residential estates within the Park District will have ventilation systems, telecommunications shafts, specially located air conditioners and convenient surface and underground parking.  Elevators will lead down to the underground parking areas and parking spaces will be allocated in accordance with the ratio approved in the Baku White City Master Plan.

The building facades are designed to be more durable and visually attractive through the use of modern day engineering solutions utilizing ceramic construction materials.

In contrast to the buildings in the French style, these buildings have more spacious apartments:

After the reconstruction of one of the oldest parks - Nizami Park - will become one of the most beautiful parks of the city.

The last but not the least in the process of extension of the new boulevard line and transformation of Nobel Avenue is the pedestrian bridge - its main decoration and a strategic link between the Central Business District and Fountain Square with the waterfront territory of the project - a shopping and entertainment center and the new boulevard.

As lead consultant, the world-renowned global engineering and architectural design firm Atkins (UK) performed masterplanning and detailed planning activities for the project along with specialists from Azerbaijan. Fosters and Partners (UK), established by legendary architect Norman Foster and American architectural bureau F+A Architects, with their globally renowned experience in the design of retail projects, were also involved.