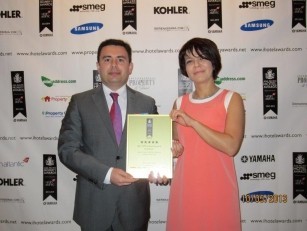 With about 1300 entries, 429 nominees of 260 companies from 23 countries in the region, it was the biggest International Property Awards regional event in the awards program’s 19-year history.

Lord Bates from the House of Lords in British Parliament presented the winning companies with special plaques during awards presentations.

A development of an international level, Baku White City Office Building features offices and commercial areas. A beautiful plaza is planned in front of the building where the foundation stone of Baku White City is situated, and which will become a beginning of a vibrant promenade along the Nobel Avenue.

The smooth silhouette is achieved by means of modern materials. The design height of this 10-storey building occupying 2 hectares is 50 meters, total area - 20 thousand square meters. Baku White City Office Building provides an installation of high-speed elevators, as well as the use of double-façade sound and thermo-insulation. Baku White City Office Building includes underground and a guest parking estimated for up to 365 cars. Along with landscaping, installation of solar as an alternative energy solution indicates the project’s environmental sustainability.

At its initial design stage, Baku White City Office Building became well-known among architects on the international arena and was repeatedly nominated as ‘The Best Project of the Future’ at international exhibitions while the whole project was the winner MIPIM Asia Awards 2011 in the category "Best Project of the future of Central and West Asia" and also received the award for "Best Urban Project" at the exhibition Cityscape Global 2011.

As a result of the government's initiative to improve environment in Azerbaijan and in the capital particularly, Baku White City project was initiated with sustainability as its core value, where phenomenal architecture was a bonus.