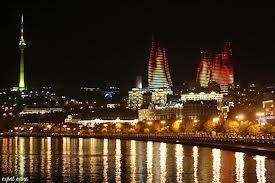 The symbol of modern Baku - FLAME TOWERS - has received an international award.

Flame Towers decorating the panorama of the city and being its symbol was announce a winner of the contest MIPIM 2013 - the largest investment exhibition of innovative projects in the European real estate market - in the nomination "The best hotel and tourist center." Earlier, the lighting of Flame Towers was recognized to be the best in the world according to a survey skyscrapercity.com - an influential forum on urban development.

This is not the first recognition of the success of Baku's modern architectural complexes at the international level. Modern Baku is becoming more famous in the world, confirming the reputation of the city where antiquity and classical blend harmoniously with the latest architectural achievements.

The project of Heydar Aliyev Cultural Center summoned great interest well before its completion. One of the most influential American magazine "Architectural digest" included this building in the list of the most grandiose and magnificent architectural structures in the world of 2012. The complex was designed by the British architect Zaha Hadid - the most famous woman-architect in the world. In addition to numerous prestigious architectural awards, in 2004 she was awarded Pittsker Prize for achievements in the field of architecture, and in 2009 in Japan has been awarded the Imperial Prize.