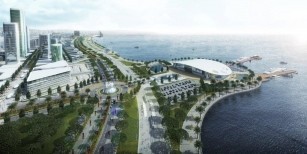 The conceptual master plan for the Port District within Baku White City Project has been completed.

The concept was developed in accordance with the order of the Executive Power of Baku № 415 dated 09.07.2011 and the Port district covers a total area of 74 Hectares, located between Yu. Safarov street, H. Rustamov street and Nobel Avenue, but also including the adjacent areas of the Baku Bay.

The Area is in the western part of Baku White City and joins the center of Baku extending along the line of Baku Boulevard to create a comfortable and relaxing atmosphere for citizens to enjoy in the future.

This arrangement of the buildings will provide a stunning view of a truly spectacular coastal panorama, including Crystal Hall and Flag Square.

The infrastructure of schools, parks and pedestrianized streets are well developed.  Easy access to the new office buildings, hotels and residential complexes will be provided by the extension to Neftchiler Prospect and new road with meet all the requirements of a modern metropolis.

Due to meticulous planning and the exceptional coastal strip location, the Port District is destined to become another architectural gem of Baku Bay.

Currently, the development of the Green Hill district and the western part of the Waterfront District of Baku White City project is nearing completion and the project opens up new opportunities for investors in the other two areas of the central area of ​​Baku White City - Fountain Square, and the Park District, that will consist of mid -rise buildings, 7 - 19 floors, with the podiums, located above Nizami Park allowing a beautiful view of the boulevard waterfront.