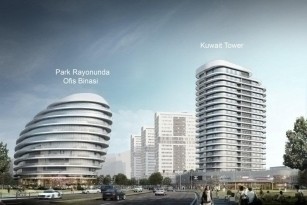 The delegation of the Ministry of Foreign Affairs of Kuwait familiarized themsleves with the project of Kuwait investors with Baku White City.

Guests were presented the concept design of Kuweit Tower, which is the first Kuwaiti investors in the Baku White City project. AVEY MMC company with 100% Kuwaiti capital invested in the project of a residential building in the area of one of the oldest parks of Baku - Nizami Park, which is now part of the Project Baku White City.

The building is located on the territory of 0.61 hectares, along the Boulevard Street of Baku White City, running down to the sea up untill the new Boulevard line. Kuweit Tower is a 20-storey building with a liasalbe area of ​​14 800sq.m., with surface and underground parking for 140 cars as per the master plan regulations . It is planned that the building will have 93 apartments and 3 lifts.

Due to its location the building will have views of the park Nizami, one of the largest parks in the city, of a total area of ​​10ga, and beautiful panorama of Baku Bay and Flag Square. New metro station with access to the Fountain Square will make the district more convenient for its residents.

Guests were also briefed on the progress and future work, on further development  of the road network, engineering and utilities, telecommunications network. Guests also got acquainted with the conditions provided by the Government of Azerbaijan and the Baku City Executive Power for a favorable investment climate.

Regardless of the investment, the project offers the provision of legal and technical support to investors and builders of Baku White City project from the start to completion of the facility, based on the "one window" principle.

It was also mentioned that some of the building projects were nominated for the awards at the exhibitions in Europe and Asia. And the whole project was the winner MIPIM Asia Awards 2011 in the category "Best Project of the future of Central and West Asia," and also received the award for "Best Urban Project" at the exhibition Cityscape Global 2011.