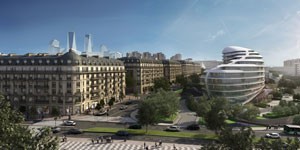 Baku White City Office Building receives award for its contribution to the development of modern architecture in the city.

The organising committee of the established magazine Azerbaijan Business Times nominated Baku White City Office Building to receive an AZERI BUSINESS AWARD in the category for ' Contribution to the development of modern architecture of the city'.

Baku White City Office Building is widely know within international architectural circles and has received a number of nominations from exhibitions, in Europe and Asia, for 'Best Project of the Future'.  Designed by 'Atkins' , this office building represents the entry to the project by Nobel Avenue and is a serves as the gateway to Baku White City.

The office building is the last in a line of five buildings situated along H. Rustamov Street, in the Green Hill district which is being actively developed by both local and foreign investors.