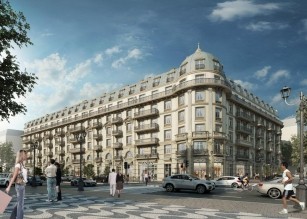 The construction of the next building started within Baku White City project.

The construction of a 7-storey, 7-unit building over an area of 0.78 hectares has started.  The building will have a total area of 15600 sq. m., and approval for this building was granted on 26th September 2012, under Executive Power of Baku City Order No. 409.

Designed by Atkins, in cooperation with local architects, the project has been specially created as part of the Baku White City Project.  The housing estate will be built in the Green Hill District, which is within the green zone of Baku White City.

The construction site is bounded by X. Rustamov street on one side and on the other by 1ci Yaşıl Ada küçəsi - one of the first streets of Baku White City. This street connects Green Hill district with the new Fountain Square and an angled tower on the building indicates the point where these streets intersect.

This is not the first building of the French style housing estate, which is becoming more and more popular, with a pricing range of AZN900 – AZN1200 per square meter. The spacious apartments are of different types and layouts with standard or mansards based on the following dimensions:1 bedroom – 90 sq.m.,2-bedroom – 125 sq.m., 3-bedroom – 145 sq.m.

Baku White City Project French style buildings incorporate elevator access to underground parking, water tanks / reservoirs, communication shafts and air conditioning ducts, all of which are intended to maintain the building's facade in an original condition. Materials chosen for the facade and the roof, number of parking spaces, children’s playground availability, fully comply with the technical specification and restrictions specified within the Masterplan.