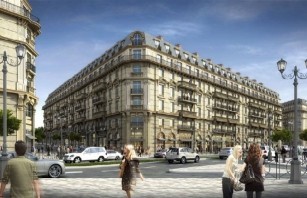 The construction of the next building within Baku White City project has started.

The construction of a 7-storey, 9-unit building over an area of 0.85 hectares has commenced.  The building will have a total area of 17950 sq. m., and approval for building was granted on 6th July 2012, under Executive Power of Baku City Order No. 285.

Designed specially for Baku White City Project, the building is modeled in a French style and includes: a large, courtyard of 4800 sq.m., a children's playground area and 135 parking space within the underground parking area.
Materials chosen for the facade and roof fully comply with the technical specification and restrictions specified within the 'Master' plan.

Baku White City Project buildings, constructed in the French style, incorporate elevator access to the underground parking, water tanks, communication shafts and air conditioning ducts, all of which are intended to maintain the building's facade in an original condition.

This building is the 5th started within Baku White City Project and when finished, will complete the formation of a 'quarter' bounded by S. Vezirov Avenue, Nobel Avenue and H. Rustamov Street.  When the reconstruction works by  Azeryolservis are completed this street will be turned into an avenue with a road corridor 45 meters wide and 1.7 km long, connecting Nobel and Babek Avenues, both of which are main arterial highways of the city.

The construction of the french style building is coming to an end.