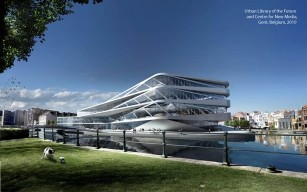 On the territory of Baku White City the international architectural design company UNStudio has began designing the Head office for one of the Banks in Azerbaijan.  The project documentation, including construction drawings and engineering services, will be developed by Azerbaijani specialists.

The design territory is situated along the Nobel Avenue opposite to Baku White City Office Building, which is currently under construction. Prospectively the building will have 7 storey accommodating 10 000sq.m. of useful area and the parking zone for up to 265 cars.

Taking into consideration growing demands of local banks for convenient infrastructure, easy access roads and working environment for their offices, the agreement has been reached on design of neighboring buildings in order to form a bank district in Baku.

UNStudio is one of the leaders in innovative architecture. With the offices located in Amsterdam and Shanghai, UNStudio has expanded its capabilities across the globe, by realizing such projects as: Mercedes-Benz museum in Stuttgart, UNStudio Tower office building in Amsterdam, Grand Hyatt hotel in Frankfurt on Main, National Museum of Art in China, Singapore University of Technology and Design, Columbia Business School in New-York, Five Franklin Place residential building in New-York and others. For more detailed information you can visit UNStudio’s official web-sitewww.unstudio.com

Baku White City urban development project is carried out within the framework of the Decree of Mr. ILHAM ALIYEV, the  President of the Azerbaijan Republic entitled “COMPREHENSIVE ACTION PLAN FOR IMPROVING THE ECOLOGICAL CONDITIONS IN THE AZERBAIJAN REPUBLIC DURING 2006 – 2010”. More detailed about the project you can see on the web-site www.bakuwhitecity.com