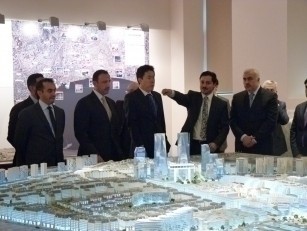 Chief of Emir of Dubai Administration, executive director of Dubai Investment Corporation, Chairman of Dubai Bank and Chairman of the Board of Directors of Dubai Islamic Bank Mr. Mohammed Ibrahim Al-Shaibani and his accompanying delegation familiarized themselves with Baku White City Project.

Other projects were presented to Dubai delegation as well. All projects were met with great interest by Dubay delegation. With regard to Baku White City project Mr. Shaibani said he was ready to share his experience in that field. Chief of Dubai Emir`s Administration also underlined he would also visit other regions of Azerbaijan to familiarize himself with the country`s tourism opportunities more closely.

Urban development project Baku White City is the part of the decree of the President of Azerbaijan Ilham Aliyev and it is of high-priority for its significant contribution to improvement of the ecological situation of the capital.

More detailed information about the project can be found on the website www.bakuwhitecity.az.