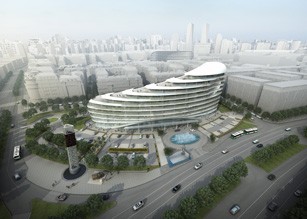 The construction of the next building on the territory of Baku White City has started.

Following the order of the head of the Executive Power of Baku Mr. Q. Abutalibov the construction of another residential building on the territory of Baku White City has already begun.

The building represents 7-storey 6 block structure, which was designed by Atkins together with local specialists.

ECOL (SOCAR) has almost finished the cleaning of the polluted areas of the Green Hill district, where this building is located and the development of the infrastructure started.

Design development targeted at transforming Khagani Rustamov street into the modern 6-strip avenue with 45 m width where this building will be situated is completed. This new prospect will connect 2 main traffic arteries – Nobel and Babek avenues.

At the same time local and foreign investors have completed the preparation works for the construction of other buildings among which is Baku White City Office Building situated at Nobel avenue. Being one of the iconic buildings of Baku White City project, still on the design stage it became widely known among the architects  and  was nominated for the “Best future project” award at the international exhibitions more than once.

The building will be built on the territory of 2 ha where a small platform with the foundation stone of Baku White City project is placed as well.

The planned height of Baku White City Office Building is 50 meters. The total area of the 10-storey building will be 20 000 sq. m of office areas with single-level ground and underground parking spaces. Moreover, the building will be equipped with the special solar batteries in order to receive alternative energy in 144.1 kw volume per day.

Undoubtedly, the construction of the building of this level will contribute its mite in the modern architecture of Azerbaijan.

Urban Development Project Baku White City is carried out under the Decree of the President Ilham Aliyev on the approval of the «Plan of complex measures to improve the environmental situation in Azerbaijan in 2006-2010». Detailed information about the project can be found at www.bakuwhitecity.com.