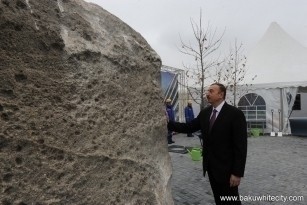 President Ilham Aliyev and his wife Mehriban Aliyeva have attended a groundbreaking ceremony of the Baku White City project.

The President of the Republic of Azerbaijan and his family members arrived at the Khatai district of Baku to attend the groundbreaking ceremony of the Baku White City project.

President Ilham Aliyev was informed about the ongoing and upcoming work on the Baku White City project. It was indicated that in accordance with the new development project the most modern and largest residential settlement would be established on the most environmentally unsuitable area polluted with oil and oil waste. Also to be built are office buildings, shopping centers, parks and a boulevard which will link the new residential area with the sea. The social infrastructure of Baku White City will be created at the level of the latest requirements.

The President examined the project plan, reviewed the cleaned area and was familiarized with the work done.
It was mentioned that preparations were under way for the construction of new residential buildings.

The area located in the center of the Baku Bay covers an area of 221 hectares and was once known as the Black City. It was completely unusable from an environmental point of view.

The Baku White City project was approved by a special decree of President Ilham Aliyev. A UK-based international design company are the project’s chief consultants.

Along with local experts, employees of foreign companies have been involved in drafting the project. The launch of the project opens up opportunities for foreign and local investors.

After reviewing the premises, the President unveiled a symbolic foundation of the White City.

My congratulations! A wonderful project is being launched in Baku. We will create a city within a city. The implementation of the White City project is beginning. This is a very important event for our country and city. The city has a wonderful name, architecture and structure. The establishment of this city in Baku is quite symbolic – the White City is being set up in the Black City. Different people have used the rich oil fields of Baku and Azerbaijan to improve their financial status. But they have caused serious damage to the city’s environment. As a result of the oil operations that were carried out without compliance with environmental regulations, this place was turned into a Black City. Huge effort is now made to clean it up. Oil waste has been siphoned out from a depth of several meters and other environmental measures taken. In general, the cleaning of this area is an extremely important issue for the ecology of Baku. But the establishment of a new city in this cleaned area is a major event, which is evidence of Azerbaijan’s development.

Extensive measures are taken today to make Baku even more beautiful. The Baku boulevard will be extended several times. Currently, it is 4 km in length. After a few months, we will celebrate the opening of a new boulevard. The new boulevard together with the State Flag Square will be more than 10 km long. New opportunities are created for the residents of Baku to walk and have a rest. We will also improve this part of town. New avenues will be laid here.
Thus, tens of kilometers of new public spaces may be established along the coast.

I am sure that both local and foreign investors will participate in the construction of this city. This project has been designed with great professionalism. It has already been introduced in important international events and conferences and received high awards. It is one of the finest architectural projects worldwide. Local companies, architects and professionals have contributed to its development. At the same time, the world’s leading architectural, design and construction companies have been involved with this project as well. So the day has come to lay the foundation of the White City. Some time ago, all preparations were made. I have signed a relevant order. I do hope that beautiful buildings will be built here in the near future. Each building must be an architectural monument. Each building must be constructed with very good taste, neatly and professionally, to make our beautiful city even better.

The implementation of this project this year is remarkable also because the world is overwhelmed by a financial and economic crisis. Certain experts say there will be a new wave of the crisis or that it may have already started. The world’s financial sector is exposed to crisis trends. In some countries, the economic crisis has reached a point when people take to the streets. Pensions and wages are being cut. The execution of all infrastructure projects is being reversed. In Azerbaijan, however, we are laying the foundation of a project measured in billions of dollars. We know that investors will come. The city will be built by the private sector, the government realizes only infrastructure projects. An underground station will also be built here. All utilities will be provided by the state – roads and so on. All buildings, offices must and will be built by the private sector, local and foreign companies.

Azerbaijan is a favorable place for foreign investment. We welcome all investments. I am sure that we will soon inaugurate first buildings.

I wish you, especially construction workers, success in this work. The entire work should be carried out at a high level, so that our city becomes even more beautiful. I would like to take this opportunity to congratulate you and the people of Azerbaijan on the Day of Solidarity of World Azerbaijanis and the New Year. Thank you.

The Director-General of the Baku White City project, Ruslan Sadigov, addressing the head of state, said:

Mr. President, please allow me to take this opportunity to wish you and your family a Happy New Year on behalf of our staff. It is a great honor for all of us that such a ceremony is conducted on your birthday. Congratulations! We wish you happiness and success in all your endeavors.