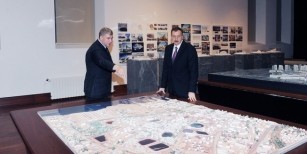 President Ilham Aliyev was informed about the ongoing and upcoming work on Baku White City project. It was indicated that in accordance with the new development project the most modern and largest residential settlement would be established on the most environmentally unsuitable area polluted with oil and oil waste. Also to be built are office buildings, shopping centers, parks and a boulevard which will link the new residential area with the sea. The social infrastructure of Baku White City will be created at the level of the latest requirements.

The President examined the project plan, reviewed the cleaned area and was familiarized with the work done. It was mentioned that preparations were under way for the construction of new residential buildings.

After reviewing the premises, the President unveiled a symbolic foundation of Baku White City.