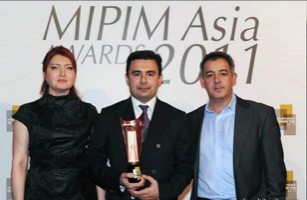 Ceremonial presentation of this prestigious award to the Baku White City Project was held on November 16 in Hong Kong.

MIPIM ASIA 2011 exhibition is held on November 15-17 at the Exhibition Center of Hong Kong - Hong Kong Convention & Exhibition Center. This is the biggest investment exhibition of innovative projects in real estate market, founded in 1997 and held annually in Hong Kong. Within three days the exhibition was attended by representatives of 1021 companies from 42 countries, including 384 investors, 146 exhibitors, the event was reported by 190 journalists.

Urban Development Project Baku White City is carried out under the Decree of the Azerbaijan President Ilham Aliyev and it is one of the priority projects which makes a significant contribution to improving the environmental situation in the capital.Detailed information about the project can be found at  www.bakuwhitecity.az.