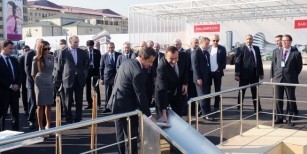 A foundation-laying ceremony for the French Lyceum in Baku has been held.

The ceremony participants warmly welcomed the Presidents of Azerbaijan and France.

First, the Agreement between the Government of the Republic of Azerbaijan and the Government of the Republic of France on the establishment of a French Lyceum” was signed. On behalf of Azerbaijan, the document was signed by Foreign Minister Elmar Mammadyarov and on behalf of France by the Minister in Cooperation Issues under the Ministry of Foreign and European Affairs, Anri de Rencur.

The Presidents of Azerbaijan and France delivered speeches at the ceremony.

Mr. President, let me cordially welcome you to Azerbaijan again. Your visit is of historic nature. The President of France is visiting Azerbaijan for the first time. I am sure that your visit will contribute a lot to the further successful development of French-Azerbaijani relations. We have multifaceted relations covering all areas. The cooperation existing between our two countries in recent years inspires us even more and leads us to believe that French-Azerbaijani relations will be of strategic nature in the future too.

Our political relations are very intense. I have repeatedly visited your beautiful country, while today you are our guest. The prospects for our political cooperation are also great. France is playing an important part in the development of relations between Azerbaijan and the European Union. I would like to thank you for the support that you personally and the country you are leading have been providing to European Union-Azerbaijan relations. The recent “Eastern Partnership” summit has demonstrated again that the relations between the European Union and Azerbaijan are developing successfully. France is also playing a special part in Azerbaijan-NATO relations. I am sure your country will continue to support the development of these ties.

Of course, regional security issues are always in the spotlight. We have had a very broad and sincere discussion on these issues today. As a co-chair country in the Minsk Group, France plays an important role in the peaceful settlement of the Armenian-Azerbaijani conflict over Nagorno-Karabakh. We appreciate this role and hope that thanks to your personal efforts the conflict will soon be resolved in line with international law and the territorial integrity of our country will be restored.

Azerbaijani lands, Nagorno-Karabakh and surrounding seven districts, have been under occupation for many years. As a result of this occupation and a policy of ethnic cleansing, more than one million Azerbaijanis are living a life of refugees and IDPs in their native land. An end must be put to this, and as you pointed out, the status quo must be changed. I think there are good opportunities for changing the status quo, and Azerbaijan is more than anyone interested in changing the status quo because it is our land and our land is under occupation. International organizations have passed decisions on the issue – the UN Security Council, the OSCE, the European Parliament, the Council of Europe, etc. So there is a legal framework for resolving the issue. I am sure that more serious steps will be taken in the near future, the conflict will end and peace and cooperation will be established in the South Caucasus.

The economic cooperation between our countries is also developing very successfully. I can say that trade between our countries exceeds $3 billion over the first 8 months of this year, and there is room for further development. I hope that by the end of the year this figure will reach $4 billion. There are around 40 French companies successfully operating in Azerbaijan. They implement various ecological and environmental projects. Azerbaijan’s waste disposal plant is being built by a French company. French companies are involved in the conceptual development of the Baku underground. Our first telecommunications satellite will be put into orbit by a French company. So there are good opportunities for cooperation in this area too.

Our cooperation in the area of energy security is successful. The discovery by French companies Total and Gas de France of a new gas field in Azerbaijan will enhance our country’s energy potential and have a positive impact on European energy security. Because, as you know, Azerbaijan is playing a very important part in the Southern Gas Corridor. These issues are also part of the European Union-Azerbaijan agenda.

Finally, our cooperation in the humanitarian sphere is very broad. A center of Azerbaijani culture will start operating in Paris soon. And today we will lay the foundation for a French Lyceum in Baku. This is a very remarkable and wonderful event. The launch of this Lyceum will further strengthen French-Azerbaijani relations. It is a symbol of our friendship. At the same time, this is major investment in Azerbaijan’s education. I would like to express my appreciation to everyone who has contributed to the creation of this Lyceum. The participation of the French President in this foundation-laying ceremony certainly makes it special.

I am sure, dear Mr. President, that we will also attend the opening of this Lyceum together. Once again, welcome to Azerbaijan, and I wish you and the country you are leading further successes. Thank you.

In remarks at the ceremony, French President Nicolas Sarkozy said:

Dear Mr. President! I am pleased to attend the foundation-laying ceremony for the Baku French Lyceum, to be here in Baku with you. The decision to establish this school is not only an example of high-level diplomatic and political ties between our countries, it is evidence of Azerbaijan’s attitude. It demonstrates Azerbaijan’s dynamism and desire to be open to the world.

Baku is an important hub. It is a place where different peoples and cultures have crossed over for centuries. The French Lyceum will epitomize the history of this country. Thanks to the support of the State Oil Company of Azerbaijan and the Heydar Aliyev Foundation led by your wife, Mrs. Mehriban Aliyeva, we are laying the foundation of a French Lyceum on the Avenue which was once home to the Nobel brothers who have contributed a lot to the development of the oil industry in your country. I want to thank you again, Mrs. Mehriban Aliyeva.

With support of the French mission of secular education and the ministries of education of our countries, this Lyceum will contribute to the formation of a French-speaking elite. At the same time, French universities are always open to these French-speaking students. They will receive the knowledge and return to their country for the benefit of Azerbaijan.

I know that students from Azerbaijan are receiving education in France thanks to the scholarships of the French Government and, in recent years, and of Azerbaijani Government too. I want the cooperation between universities to be enriched and hope that the French Lyceum will contribute to that. This Lyceum will also reflect the consistent cultural and historical ties between our countries. After the Bolshevik occupation of 1920, France granted asylum to many exiled members of Azerbaijan’s first independent government. In November 1944, Gen Charles de Gaulle, who was traveling to Moscow to discuss the outcome of World War II, spent a night in Baku. I am not forgetting that.

Since Azerbaijan restored its independence our countries have had a dynamic and fruitful cooperation, especially in the spheres of education and culture. This manifests itself in strategic partnership and, as I have said, in culture.

In March 2012, the Baku Museum of Arts will host an exhibition of French masterpieces for the first time in the world. It will demonstrate around a hundred outstanding works reflecting French heritage from the Renaissance to the present.

Dear Mr. President! Dear Ilham! By deciding together with me to establish this Lyceum, you are choosing cultural diversity and Francophonie. This is a courageous choice and a successful future. France is your friend and partner in all areas. As you know, Francophonie is the bearer of such universal values as tolerance, freedom, human rights and democracy. With your authority and support for this wonderful project you show your dedication to these values, and I congratulate you on this occasion. I would like to thank you again. I want to express my gratitude to you personally, Mr. President, and your wife for the warm reception you gave us today. Rest assured that France is your friend and you can trust it. Thank you!

The Presidents of Azerbaijan and France reviewed a stand reflecting the appearance of the future Lyceum.

Then the foundation of the French Lyceum was laid. President Ilham Aliyev and French President Nicolas Sarkozy lowered a capsule into the foundation. The heads of state and Azerbaijani First Lady launched the grouting facility.

The Presidents of Azerbaijan and France reviewed a stand reflecting the appearance of the future Lyceum.

Then the foundation of the French Lyceum was laid.

President Ilham Aliyev and French President Nicolas Sarkozy lowered a capsule into the foundation. The heads of state and Azerbaijani First Lady launched the grouting facility.

It was indicated that the Lyceum, to be built at the initiative of the Heydar Aliyev Foundation, will open up educational opportunities for French-speaking nationals temporarily or permanently residing in our country and citizens of Azerbaijan to study in French. The French Lyceum will operate on the classical French curriculum used at 12-year general education institutions starting from kindergarten. Classes will be conducted in French in accordance with the requirements of the national education system in France. The certificate issued to students will meet the standards and requirements of the Ministry of National Education of France and will be recognized by it. Graduates will have the opportunity to continue their education at any higher education institution of France.

The French President was informed that the school will be built in an area of Baku called “White City”. The “Baku White City” project, one of the biggest and unique urban planning projects in the world, is noted for the fact that there will be a Parisian quarter here.

Then President Ilham Aliyev and President Nicolas Sarkozy met with French business people working in Azerbaijan and wished them success.