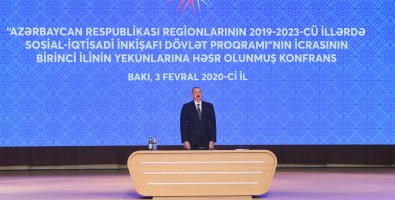 President Ilham Aliyev: "Improvement of the environmental situation is always in the spotlight."

A conference dedicated to the results of first-year implementation of "The State Program on socio-economic development of the regions of the Republic of Azerbaijan in 2019-2023" has been held. President of the Republic of Azerbaijan Ilham Aliyev attended the conference. As part of the work of improvement the environmental situation in the country, President Ilham Aliyev also mentioned Baku White City project.

"A lot of work has been done in this direction in recent years. Residents and visitors to Baku feel that air quality has improved significantly. Due to what? Due to the fact that we have eliminated many sources of air pollution... Air and the environment were largely polluted by the Black City. At present, there is a White City in its place. This is also a large urban development project. In the near future, as a result of the relocation of the oil refinery from this territory, the length of the boulevard will be increased and the environmental situation in this area will become even better." - Mr. President mentioned.