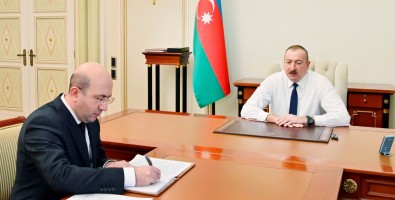 President Ilham Aliyev: "The removal of Black City and the creation of environmentally friendly White City in its place is yet another historic achievement of ours."

President of the Republic of Azerbaijan Ilham Aliyev has received Anar Guliyev on the occasion of his appointment as the chairman of the State Committee for Urban Planning and Architecture.

In his speech he mentioned Baku White City project: "Baku emerged during the period of tsarist Russia and became an industrial city in Soviet times. Of course, the large-scale industrial development had a very adverse impact on the state of environment in our city...  I can list other sites as well. One of them is the Black City. Some people forget that while driving through there, we used to roll up the windows because it was impossible to bear this smoke and stench. We have transformed the Black City into a White City. I believe that this is also one of the largest town planning projects on a global scale that meets modern standards. Apartment buildings are already under construction there, public places are being set up. The removal of the Black City and the creation of the environmentally friendly White City in its place is yet another historic achievement of ours."