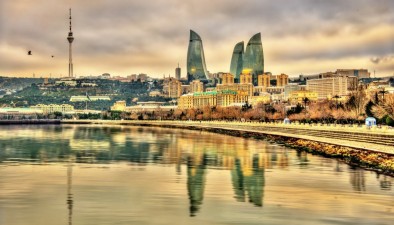 A discussion was held on the development of the road network and infrastructure of Baku White City project, implemented within the framework of “Comprehensive action plan for improving the ecological conditions in the Azerbaijan Republic during 2006 - 2010” and according to the order of the Executive Power of Baku City dated June 11, 2007 approved by the Presidential Decree.” Aydin Kerimov and  Rufat Mahmud, Advisors to the Chairman of the State Committee for Urban Planning and Architecture, Frank Hof, the project manager of AS+P urban development company, the winner of the international tender organized by the Committee, and his deputy Stephanie Vladika, as well as representatives of Baku White City project.

Frank Hof, project manager at AS+P, emphasized the importance of building an engineering infrastructure, creating a sustainable environment and preserving cultural heritage. General plan of Baku White City project, road network and main infrastructure of the city, building density and number of storeys, as well as construction of new schools and other social facilities were also discussed.

During the meeting architectural diversity, ecological compatibility and considered integration of Baku White City into the existing urban context of the city were discussed, and it was noted that the development of the White City project is a successful example of urban development in Baku city Master Plan.