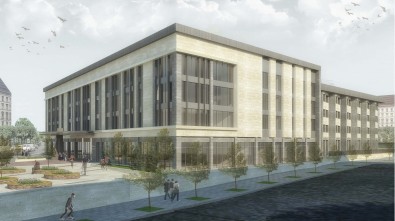 Designing of the next educational institution by order of the Ministry of Education of the Republic of Azerbaijan in the territory of Baku White City for its subsequent construction as part of the development of social infrastructure facilities has been completed. The conceptual solution of the secondary school was proposed by the Turkish company BUDA Mimarlık and was developed in detail by the Azerbaijani engineering company ArchiCO.
The total area of ​​the school building, located on the territory of 1.3 hectares, is 15,000 square meters. A carefully thought-out area in front of the school building, made in a modern style, promises to become a favorite meeting place for students. The landscape of the school grounds, which meets special requirements, includes football and basketball courts, as well as treadmills. In the school, designed for 1536 students, along with subject and class rooms, laboratories, administrative premises, art circles, a dining room, a sports hall and an assembly hall are provided.
The school building will be located in the Central Park District on Suleyman Vezirov Street, surrounded by Parisian style houses. To comply with transport requirements, convenient pedestrian walkways, roads, parking for parents, as well as a stop for public transport will be provided.
The new school will be the third in the territory of Baku White City, after the French Lyceum and the Lyceum of Caspi. Next year, it is planned to design two more schools and kindergartens in Baku White City.