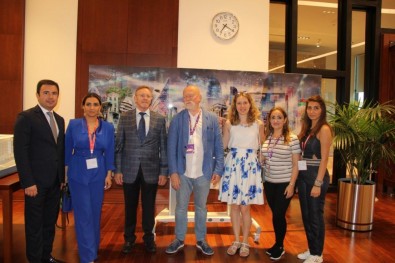 On June 7-9, 2019, International Architecture Forum “Mass Tourism in Historic Cities” organized for the first time in Baku by the International Union of Architects and the Union of Architects of Azerbaijan, was held at the Heydar Aliyev Center. The main objectives of the forum were to analyze the state policy in the field of development of tourism and cultural heritage, as well as to prepare a list of modern architecture for UNESCO World Heritage status.
At the opening of the Architectural Forum, the Chairman of the Board of Directors of the Union of Architects of Azerbaijan Elbay Gasimzadeh and the Director of the UNESCO World Heritage Center Mechschild Rössler made a speech. The event was attended by famous architects from the United States, Greece, Spain, Italy, South Korea, Egypt, Australia and Azerbaijan. Participants of the 4-day forum visited Baku White City as part of Baku tour.
The guests familiarized themselves with the concept of the project in the Baku White City the showroom. Here they were informed about the analysis of transport, infrastructure and construction indicators of large cities in the design process of the project.
During their visit to White City, the forum participants also took a walk at new White City districts, White City Boulevard and parks, which had already become a favorite place for tourinsts.