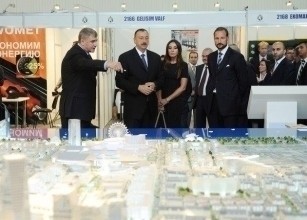 The Baku White City project will give the new life to the center of our capital.

The President of Azerbaijan Republic Ilham Aliyev and the First Lady Mehriban Alieva have visited the project`s stand at the Caspian Oil and Gas Exhibition 2011.

Baku White City Project personifies the beginning of qualitatively new stage in transformation of Baku appearance  as it is  required by the international standards. It will present new life to the center of our capital. «Baku White City Project is one of the most important projects», - said the President while visiting the project`s stand.

Baku White City causes the increasing interest of investors. Therefore, currently in a Green Hill district on 20 ha the cleaning of the polluted areas is already finishing and has been started a work on infrastructure creation.

The development and realization of  the project is implemented in accordance with the  recommendations and directives of  President Ilham Aliyev as well as within the Presidential Decree on "Comprehensive action plan for improving the ecological conditions in the Azerbaijan Republic during 2006 - 2010".

Presented to the wide public of Azerbaijan for the first time Baku White City project, has caused a great interest of participants  and visitors of the exhibition. Baku White City pavilion settled down on 180 sq. m and including project model of  1:500 scale, have been visited by 8000 visitors during  four days and all of them  received  the detailed information on advantages and investment possibilities of Baku White City. Special booklets and the CDs containing the visual information about  the project were presented as well to all visitors of the stand.

About 30 local and foreign mass-media representatives showed their interest to Baku White City project as well.

The exhibition held on 7-10th June, 2011 in  Baku Expo Centre and  organized by the official support of the State Oil Company and the Ministry of  Industry and Energy of Azerbaijan Republic, has gathered about 300 companies-exhibitors from 18 countries worldwide and has drawn attention of more than 10000 visitors from 56 countries of the world.

Detailed information about the project can be found at  www.bakuwhitecity.az.