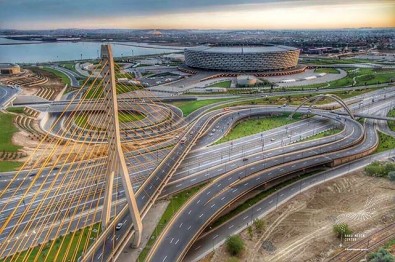 Within the framework of the “Strategic Plan for the Development of the Road Infrastructure of Baku White City Project" a new prospect is being designed in the east of Baku White City by State Agency of Azerbaijan Automobile Roads.

The project, implemented within framework of the order of Executive Power of Baku City No. 227 dated June 5, 2012, will allow to prevent the transport congestion in the center of Baku, improve the infrastructure of Baku White City and significantly develop overall transport structure of the city.

The 80 m wide prospect connecting the main transport arteries of the capital - Nobel Avenue, Babek Avenue, Heydar Aliyev Avenue, Ziya Bunyadov Avenue and the future Boulevard Road, promises to be the first of its kind.

At the intersections of the Nobel and Babek avenues, the project envisages the construction of multi-level road junctions. Along the prospect, originating from the Olympic quarter of Baku White City, wide landscaped sidewalks and bicycle lanes are planned in accordance with the concept of the project. For the comfortable availability of alternative modes of transport, this prospect envisages connections to the future Ag Sheher-2 metro station, underground pedestrian crossings, and also bus stops and taxi ranks.

In accordance with the principles of a sustainable and smart city, green stripes and sidewalks of 20 meters wide, bicycle paths, bus stops and taxi ranks, the exit of the metro station with the conditional name Y-15 (Ag Scheher-2), public parking places as well as convenient access to the future boulevard road and waterfront boulevard are planned as part of the work along the avenue.

Baku White City project is implemented within the framework of “Comprehensive action plan for improving the ecological conditions in the Azerbaijan Republic during 2006 - 2010” and according to the order of the Executive Power of Baku City dated June 11, 2007 approved by the Presidential Decree. The project, which is characterized by environmental orientation, sustainability and integrity, has been recognized by international professionals as one of the largest urban development projects of our time.

Thousands of residents live in high-quality and modern urban environment in Baku White City quarters today. The designed and constructed buildings, parks and public places continue to contribute to the beautiful architectural appearance of Baku.