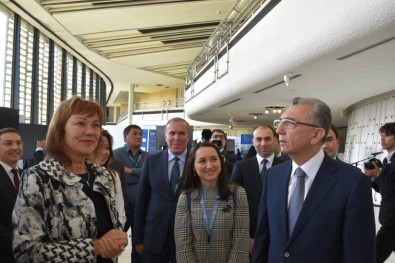 Baku city participated at "Days of Cities" in Geneva

In the framework of the 68th session of the United Nations Economic Commission for Europe “Days of Cities” exhibition in Geneva brought together Baku city Executive Power along with European cities mayors and urban managers. The delegation led by the head of the Executive Authority of Baku Eldar Azizov was represented at the exhibition by three projects demonstrating successful examples of economic, social development and environmental protection of city - Baku White City, Temiz Sheher project and the State Housing Construction Agency. Mr. Eldar Azizov delivered a speech in roundtables.

During the exhibition the visitors familiarized themselves with Baku White City project, its sustainability principles via materials reflecting the socio-economic and environmental development of the project.

Baku White City project is implemented within the framework of “Comprehensive action plan for improving the ecological conditions in the Azerbaijan Republic during 2006 - 2010” and according to the order of the Executive Power of Baku City dated June 11, 2007 approved by the Presidential Decree. Baku White City project has been awarded in the nomination "Best Future Project for Central and West Asia" at the MIPIM Asia Awards 2011 in Hong Kong, Dubai's Cityscape Global and "Best urban development project" in several other exhibitions including local and international ones.