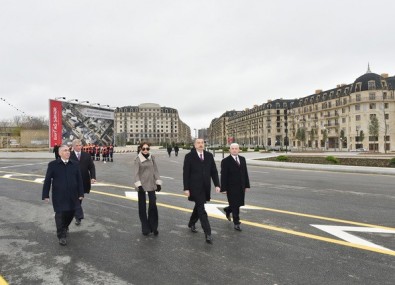 President of the Republic of Azerbaijan Ilham Aliyev and first lady Mehriban Aliyeva have visited “Baku White City” to attend the opening of the Khagani Rustamov Street, a ring-road and an underground pedestrian passage on this street, and to view a newly-built park and several quarters.

Chairman of the Board of Directors of Azerbaijan Highway State Agency Saleh Mammadov and Executive Director of “Baku White City” project Ruslan Sadikhov informed the head of state of works done in the area.

The newly-built Khagani Rustamov Street is 1050m in length and 45m in width. The six-lane street has a special parking lot.

President Ilham Aliyev cut the ribbon symbolizing the official opening of the Khagani Rustamov Street, the ring-road and the four-exit underground pedestrian passage on the street.

The head of state was also informed of what has been done as part of “Baku White City” project in 2017 and works planned to be carried out in 2018.