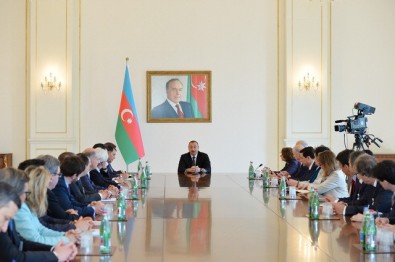 President of the Republic of Azerbaijan Ilham Aliyev has today received a delegation of MEDEF, Movement of the Enterprises of France. President spoke about bilateral cooperation and relations between France and Azerbaijan. During the speech Ilham Aliyev also mentioned French Lyceum as well as the French quarter in Baku White City:

"We have good cooperation in the humanitarian sphere and in the field of education. I hope you can visit the French Lyceum in Baku. This high school is a good example of our partnership. We are also working on the creation of a joint university. There is also a beautiful French Quarter being created within the White City. It is reminiscent of Paris. If you get a chance, go there, it is an interesting place, especially when you consider that this area used to be called the "Black City" because of the oil refining facilities built there a hundred years ago. The entire surrounding area was contaminated. Today, this project is called the "White City." It has a symbolic name. A large and even a huge part of the project envisages the creation of the Paris Quarter. Of course, the humanitarian sphere does not create any direct business activity. However, it plays a very important role in promoting friendly relations and creating mutual understanding and partnership."