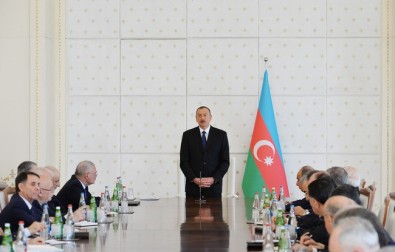 President of the Republic of Azerbaijan Ilham Aliyev has chaired the meeting of the Cabinet of Ministers dedicated to the results of socioeconomic development of the first quarter of 2016 and objectives for the future on April 09, 2016.

President Ilham Aliyev mentioned many important issues in his speech, including Baku White City. He said: "The landscaping area and Boulevard are created from the Flag Square to the Bibi-Heybat Bay. The Bay, of course, was polluting our city, Balakhani - on the one hand, Black City - on the other. There, too, much has been done to clean up and to remove land formations. At the time, all the waste oil refinery was accumulated there. Now we transform Black City into White City. It is a real grand project. Today we create miracles in Baku to improve environmental conditions for people to be healthy."