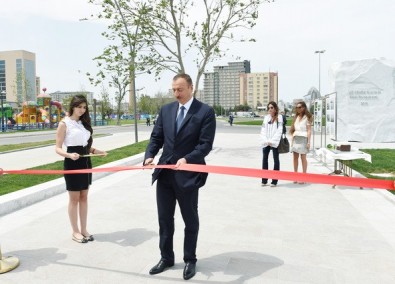 President of the Republic of Azerbaijan Ilham Aliyev, his wife Mehriban Aliyeva and daughter Arzu Aliyeva have attended the opening of the Baku White City boulevard.

The head of state cut the ribbon symbolizing the official inauguration of the boulevard.

The President of Azerbaijan was informed that the length of the Baku White City boulevard is 2.7 km, and it occupies a total area of 33 hectares. A children`s cinema theatre will be built here. There are basketball, volleyball and two football pitches in the new boulevard. There is also an open-air gym, and a 2 km long bicycle track.

The head of state met with local residents in the boulevard.