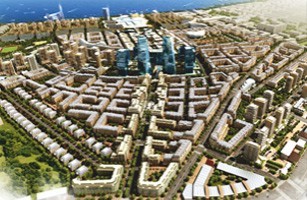 A new modern city centre instead of the Black City

The project developed by the order of the Executive Administration of Baku City is designed to create the new modern centre of the capital city.

To the decree of the President of the Azerbaijan Republic Ilham Aliyev approving the “Plan of Integrated Action to Improve the Environmental Situation in the Azerbaijan Republic during the Years 2006-2010 “ and in accordance with the order of the Head of the Executive Power of Baku City dated 11 June 2007, it was decided to restore and develop the so-called Black City district of Baku, which will from now on be called Baku White City. The area covering 221 ha will be totally transformed to take on a new image while also altering and expanding the notion of a modern city centre as such.

The Baku White City master plan envisages the creation of 10 universal urban districts with each of them to offer its residents the best living, working, recreation and entertainment conditions.

In accordance with the order of the Executive Administration of Baku City it is planned to rearrange and expand the Boulevard, the gem of Baku that is situated right in the centre of the Baku Bay. The Neftchiler Avenue, one of the most favourite streets of people of Baku that runs along the Boulevard will be extended as well.

The modern centre of Baku will be universal thanks also to the new city transportation system. For instance, it is planned to build a new Underground station that will give access right to the central square of Baku White City; it is also in the plan to expand the bus route grid and to run a tram line along the coast. Also along the Boulevard should run the all-new water transport line.

The infrastructure communication blueprints were developed and accommodated with the concerned state organisations taking part in the implementation of the project, such as “Azeryolservis”, “Bakelektrikshebeke”, “Azerigas”, “Azersu” and “Aztelecom”, to mention but few.

The creation of a new modern city centre in the capital will provide addional opportunities to attract local and foreign investments. The future investors have special privileges kept in stock for them as an incentive.

“Ecol Engineering Services Co” (SOCAR) has started the special polluted land purging activity has been started in the Baku White City area subject to the presidential decree and in accordance with the order of the Executive Administration of Baku City.

The Baku White City Project  involves not only the British company Atkins that specialises in engineering designs and the Azeri specialists, but also such luminary architect firms as Foster + Partners and F+A Architects.

Atkins specialises in architectural and engineering designs. The company has created and carried into life a string of remarkable projects in 200 countries world-wide since its inception way back in 1938. The most famous project of Atkins, Burj-Al-Arab, is the tallest hotel in the world built on water; it has been entered into the Guinness Book of Records.

Norman Foster is founder and head of the company “Foster + Partners”. Founded in 1967, the company has the world-wide practice with workshops in more than 20 countries. Baron Foster won the international recognition for his diverse projects including the re-construction of Der Reichstag in Berlin, the Bank of Hong Kong, the building of Kommerzbank in Frankfurt and Sainsbury Centre for Visual Arts in Norridge. The company has been decorated with more than 400 awards and certificates for excellence and has won more than 65 international and national competitions.

The American architectural bureau “F+A Architects” established in 1973 joined the ranks of leaders by creating retail trade facilities in vacant areas as well as by re-constructing and reviving the underdeveloped trade enterprise placement regions. F+A Architects are known also for their commercial facility designs.